January
It’s that time of year again, the beginning.

February
As I’ve said in the previous four posts on the presidents, the gentlemen who held office from the end of Ulysses Grant’s term to the beginning of William McKinley’s tend to be obscure.

March
I actually got this book from the library after I saw Greene appear on The Big Bang Theory.

May
A couple of years ago, I took an English literature class.

June
I had a little trouble with this one.

July
I remember a few years back when I worked at BigHugeCo when a coworker lamented that kids no longer have manners, that kids of our generation respected their elders.

August
I’ve always had mixed feelings about our 28th president.

September
He is the godfather of Cleveland organized crime.

October
Jackie Bouchaine has a small role in Second Hand Goods, but she is pivotal in both Northcoast Shakedown and is central to the third Kepler novel Bad Religion.

November
Robert Parker took a break from his Spenser series to craft this tale of three generations of Boston cops.

2012 was not the suckfest most of the past decade has been. The economy got a little better. There were no Category 5 storms sinking Gulf Coast cities. Nobody blew up an oil well. Nobody slammed jetliners into buildings. Most importantly, the world didn’t end. There were some dark moments. We’re still trying to understand what happened in Sandy Hook.

As 2012 winds to a close, it’s time to take a look back and see where we’ve been and how far we come. Today, I’ll share where I’ve been – ‘Cuz it’s all about me, of course. Tomorrow we’ll look at the world.

January – I boldly predict I will have a short story a month published and six science fiction sales. G’wan. Ask me how that one worked out. Ask me.

February – Nita and I celebrate the fourth anniversary of our first date.

March – You know that superbug that’s supposed to decimate the human race in a matter of weeks that scientists keep warning us about? I think I catch this in March. It takes me a week to fully recover.

May – AJ graduates high school. I’ve only been a stepdad for four years, but it’s overwhelming watching him become an adult.

June – Four months after the fourth anniversary of our first date, Nita and I celebrate our fourth wedding anniversary.

July – At our high school reunion, an alarming number of my classmates now look like their grandparents.

August – AJ starts school at UC Blue Ash. I start at Wilmington College, Cincinnati. We now have three college students under our roof.

October – I attempt to fix the fence in the backyard. I’ll finish it in the spring.

November – I voted for Obama. Because I didn’t feel like setting women’s rights back to 1950 when daylight savings ended this year.

December – Work on Holland Bay resumes in earnest. Maybe. If I can find time.

I don’t do resolutions. Resolutions have a habit of evaporating by Valentine’s Day. In years past, when I had gym memberships, I could watch this in action. The day after New Years, I’d have to cut workouts short because the gyms would be packed. By the end of January, it would be crowded, but I could get to all my machines and not have to fight for shower space. By Valentine’s Day, the place would be deserted some nights. Slackers.

So I set goals. I’ll share a few here, but not all of them.

The first is obviously weight. I managed to nail this one pretty good in 2011. In 2012, I maintained, but I need to really get serious again. To that end, I plan to…

My day job is programming, but right now, I program what’s called “web forms” in Microsoft’s C#. Basically, you make up a web page, then write code behind the page to make it do stuff. My current boss doesn’t even like this technology, and my old department is moving to a more modern version of C#. So, it’s time for me to learn how to write for…

It’s a mobile world. I need to write mobile.

Speaking of writing, 2012 was an eye-opening year for me writing-wise. I realized that academic efforts are the biggest conflict I have with meeting writing goals. To that end, I intend to…

“Wait a minute! You’re shopping Holland Bay? Why not self-publish it?”

I am so far not impressed with the independent route. Call it ego. Call it disappointment. I think I can do better, though.

As I said, these are goals, not resolutions. Resolutions fail to take into account that life is random and unpredictable. This is the greatest lesson I have ever learned. If you don’t accept and embrace uncertainty, you will always be disappointed and frustrated. Hell, I can get disappointed and frustrated easily enough without dodging uncertainty. Why add it to the mix?

Happy New Year, all. May you get everything you want this year and more.

I pulled on Santa’s sleigh
Christmas Eve was dark, and the snow fell like cocaine off some politician’s coffee table
Rudolph looked to the sky. He had a shiny nose, but it was from too much vodka
He said, “Boys, it’s gonna be a rough one this year.”

I pulled on Santa’s sleigh
The elves scrambled to pack up the last of the lumps of coal for deserving suburban brats
And a bottle of Jamie for some forgotten soul whose wife just left him
Santa’s like that. He’s been there.
Oh, he still loves Mrs. Claus, a spent piece of used sleigh trash who
Makes good vodka martnis, knows when to keep her mouth shut
But it’s the lonlieness, the lonliness only Santa knows

I pulled on Santa’s sleigh
And the workshop reeks of too much peppermint
The candy canes all have the names of prostitutes
And Santa stands there, breathing in the lonliness
The lonliness that creeps out of the main house
And out through the stables
Sometimes it follows the big guy down the chimneys
Wraps itself around your tannenbaum and sleeps in your hat 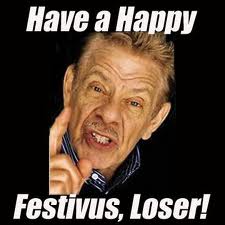 And I, in return,
Will turn up the heat
Reminding her she leaves
Down the toilet seat

girlfriend moved,
Not to be outdone,
Took off her clothes
For some Feat of Strength fun.

For her Feat of Strength,
A Festivus Miracle,
Was to do her stripper dance
On the Festivus pole!

Hanakkuh is somber,
Christmas too crass.
But a Festivus for the rest of us
Is always a blast 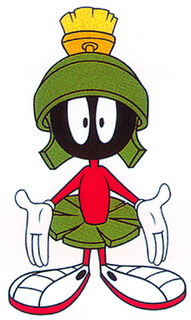 Where's the kaboom? There was supposed to be a big Earth-shattering kaboom!