It’s time to bid 2013 a fond farewell. Or maybe a not so fond farewell. I’ll look at the world’s year in review on Monday. For now, let’s talk about what’s truly important.

I pulled on Santa’s sleigh
Christmas Eve was dark, and the snow fell like cocaine off some politician’s coffee table
Rudolph looked to the sky. He had a shiny nose, but it was from too much vodka
He said, “Boys, it’s gonna be a rough one this year.”

I pulled on Santa’s sleigh
The elves scrambled to pack up the last of the lumps of coal for deserving suburban brats
And a bottle of Jamie for some forgotten soul whose wife just left him
Santa’s like that. He’s been there.
Oh, he still loves Mrs. Claus, a spent piece of used sleigh trash who
Makes good vodka martnis, knows when to keep her mouth shut
But it’s the lonlieness, the lonliness only Santa knows

I pulled on Santa’s sleigh
And the workshop reeks of too much peppermint
The candy canes all have the names of prostitutes
And Santa stands there, breathing in the lonliness
The lonliness that creeps out of the main house
And out through the stables
Sometimes it follows the big guy down the chimneys
Wraps itself around your tannenbaum and sleeps in your hat

My girlfriend, she’ll recall
Something I said
Two years ago
And smack me in the head

And I, in return,
Will turn up the heat
Reminding her she leaves
Down the toilet seat

My girlfriend moved,
Not to be outdone,
Took off her clothes
For some Feat of Strength fun. 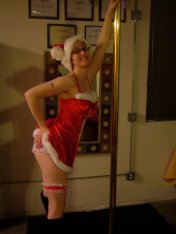 For her Feat of Strength,
A Festivus Miracle,
Was to do her stripper dance
On the Festivus pole!

Hanakkuh is somber,
Christmas too crass.
But a Festivus for the rest of us
Is always a blast

For the fourth installment of his epic Dark Tower series, Stephen King goes back in time to Roland Deschain’s early youth. After surviving Blaine the Monorail’s suicidal crash into a rail terminal, Roland and his ka-tet find themselves in Kansas City. Not our Kansas City, but one Stephen King fans will recognize instantly. The flu virus known as Captain Tripps has devastated this world. Yes, they’ve wandered into the world of The Stand. And we are explicitly shown that this world is not ours. The Kansas City baseball team is the Monarchs, not the Royals. One of the cars left behind is not a Toyota or a Chevy or any other make common in 1986. It’s a Takuro Spirit. But there is more. A large fog-like object lurks along an abandoned I-70, making a noise that makes our travelers sick. It is a “thinny,” a place where existence fading out. Roland has seen this before, centuries before, actually, in a far-flung barony known as Meijis.

In that time, young Roland and his friends Cuthbert and Alain are sent west to Meijis to count resources – horses, food, boats – that the Affiliation, the group of baronies within Midworld, can use in their war against John Farson, the so-called “Good Man.” While there, Roland meets and falls in love with Susan Delgado, a local who is promised to the mayor as his “gilly” (a sort of concubine). It’s a forbidden love that leads to the discovery of a plot by the leading men of Meijis to throw in with Farson. It is also the greatest tragedy of Roland’s life as his whole future is destroyed. By the time he returns to his native Gilead, he learns his destiny is to seek The Dark Tower, the center of all existence.

In the framing story, in the epic’s “present,” Roland and his ka-tet come across an exaggerated version of the Emerald City from The Wizard of Oz. And who is the Wizard? The ruse is created by Roland’s father’s wizard, Marten Broadcloak, who reveals that he is now Randall Flagg. It is also here that the Crimson King of Insomnia is the driving evil force in all of existence, and that all of King’s fiction (with the exception of Carrie, apparently) is part of The Dark Tower’s tapestry.

The framing story, which includes Eddie of New York’s flippant outsmarting of Blaine the Suicidal Monorail, could have made a decent standalone novel within Dark Tower series. Wandering into the world of The Stand and into a sick parody of The Wizard of Oz offers a rich amount of creative fodder, as well as making for a shorter novel. The story of Roland and Susan is novel-length story in and of itself. It might have been better as two shorter books. Still, The Dark Tower shows a renewed energy in King’s writing. Reading this, I really did want to turn the page and would feel let down when work or other life events pulled me away from the book.

I may have gone a president too far in going through all of our Chief Executives. Bill Clinton still inspires a lot of controversy today, and not just for his dalliance with intern Monica Lewinsky. However, he did preside over the longest sustained period of growth in US history. And yes, he does deserve much of the credit.

Conservatives like to say that Clinton did nothing, that his success all comes from the efforts of Ronald Reagan paying off during his term. Most men who have sat in the Oval Office would find that assessment extremely offensive, including – and maybe especially – Ronald Reagan. There is, however, a kernel of truth. Reagan’s (and Bush’s) success stems from shattering a petrified structure that grew out of the Great Society, Lyndon Johnson’s attempt to reinvent the New Deal. Love trickle down or hate it, the freewheeling eighties could not have happened with the huge tax rates of the seventies or the burdensome regulations that contributed to the stagnation of the American economy.

That said, Reaganomics represented a course-correction, not a new vision. What Reagan did was put forth a program and challenge the nation to do better. They responded. But when capitalism has the safeties taken off (something, incidentally, Adam Smith frowned upon, since being a douchebag actually went against the ideas he put down in The Wealth of Nations), it has a nasty habit of pulling apart the middle class. Clinton sought to reinvent government, offering a scaled-down version of the New Deal while massaging the markets by slashing the deficit, a perpetual thorn in the side of George H.W. Bush. It almost did not happen.

While Clinton’s appetites later became a distraction, early on, it was Clinton’s informal management style and failure to comprehend Washington politics that almost sank his presidency within the first six months. Clinton had three goals when he took office: create jobs, slash the deficit, and reform health care. (Sounds like Obama’s mandate, doesn’t it?) This last, of course, went down in flames, resulting in little more than reforming the health insurance industry. (And no, I have no nostalgia for the HMO’s of the 1990’s.) The latter was stalled until mid-decade by discretionary spending caps, but later fueled by the tech boom. That same boom would not have been possible were it not for his biggest first-term victory, the deal to slash the deficit by $480 billion.

To look at Clinton, I read Bob Woodward’s The Agenda. Woodward paints a portrait of a chaotic White House populated by about a dozen Type A personalities from the president himself to Hillary Clinton (more an adviser and informal cabinet member than a First Lady, hence her later Secretary of State posting) to point man George Stephenopoulos to consultant (and now CNN analyst) Paul Begala. Everyone on Clinton’s economic team had their own pet projects, as did Secretary of Treasury Lloyd Bentsen (channeling the ghost of LBJ), Hillary Clinton, and Vice President Al Gore. Whenever someone had to compromise, they would loudly complain. Whereas getting a consensus served Governor Bill Clinton well in Arkansas, it bogged him down with indecision early on as president.

Eventually, Clinton found his voice, his theme, and his spine. It took counseling from none other than Richard Nixon, who told him it was fine to compromise on the deficit, but he would have to hit Congress hard in demanding any new programs. Americans, the disgraced former president said, wanted a leader.

I do remember being impatient with not just Clinton, but the Congressional leadership under both parties. The Democrats in his first two years in office proved to be a fractured and contentious lot, unable to agree on much without nearly sinking their own cause. (They would do this to Obama from 2009 to 2011.) When the Republicans took over, the government ground to a needless halt because Clinton held his ground, Newt Gingrich held his breath (and stamped his feet and whined), and Bob Dole, normally a master deal-maker, wanted to be president in 1996. Even Ross Perot, the last credible third-party candidate for president, so incensed me that, in 1996, I voted for my only write-in candidate for president, writing in Richard Lamm, who lost the Reform nomination to Perot. Yeah, I was pissed off over the government shutdown. (These days, I refuse to vote for any representative or senator who held a seat in Congress in October, 2013. Sorry, but there must be consequences. If I did that at my job, I wouldn’t even be eligible for unemployment.)

Clinton presented an affable image to the public. To admirers, he cared about the middle class and minorities. To detractors, he was a snake oil salesman. There’s truth to both views, but ultimately, his 1993 deal to hack $480 billion from the deficit by 1997 ultimately led to a budget surplus in 2001. Yes, Reagan and Bush 41 definitely deserve credit for loosening up the economy in the 1980’s, but Clinton managed to balance fiscal prudence with investment in the nation’s infrastructure, education, and technology.

Since he left office…

The deficit exploded, America has lost its standing in the world, and attempts to reinvest in America have been underwhelming. As I said in my post about the elder George Bush, something seemed to leave when our best one-term president retired. Clinton managed to pick up on it and, for a time, rediscover it, but since the twenty-first century began, leadership in Washington has been spectacularly absent in two of the three branches of government.