Cincinnati is overwhelmingly rooting for the Cardinals in tomorrow’s titanic struggle.  There’s a good reason for that.  In the AFC North, one does not root for the Steelers unless one lives in Pittsburgh.

I grew up hating the Steelers.  I screamed in triumph whenever the Steel Curtain came to the old Municipal Stadium in Cleveland, only to get stomped on by the Dawg Pound.  However, I also would have my heart broken when my beloved Browns would lose in Three Rivers Stadium.  When I moved to Cincinnati, I brought my loyalty to the Browns with me (telling my then-girlfriend the Bengals would have to earn my loyalty.  Living here isn’t good enough, since no one on the Bengals had helped me move.)  My hatred of the Steelers, though, fit in nicely in the Queen City.

A funny thing happened in those intervening years.  Two funny things, actually.  One was the Bengals Lost Decade.  So much for earning my loyalty.  The other was the outright theft of the Cleveland Browns, kidnapped to Baltimore, a city also the victim of theft and kidnapping of its football team.  For four years, there were no Cleveland Browns.  And I learned to hate the Ravens.  I still hate them.  I despise them with every fiber of my being.

How much do I hate the Ravens?  I have offered to join any Baltimore or Cleveland writer at the 2009 Bouchercon in going to Robert Isray’s grave and “toasting” the late owner of the Colts for originally causing this sad state of affairs.  Were there still a Baltimore Colts, there would still be the original Cleveland Browns.  (Seriously.  Los Angeles would not have been an option for Art Modell.)

So with the Bengals unable to muster even an 8-8 record, I became a Steelers fan for four years.  For a Cleveland boy living in Cincinnati, it was horrendous.  Then the Browns returned, a shadow of their former selves.  The Bengals managed to earn my loyalty, though Mike Brown will rue the day that happened, for now I consider him beholden to me.

The Steelers – who showed solidarity with Browns fans in their final game before the Great Abuduction to Baltimore – beat the loathsome Ravens in the playoffs.

Now they just have to beat the Cardinals to rub the Ravens’ collective nose in it.

And that, friends and neighbors, is how I can live in suburban Cincinnati and root for the Steelers.  It’s a moral imperative.

(Apologies to Laura Lippman, David Simon, Marcia Talley, Tony Cheatham, and Jack Bludis.  I love your city and think they should rename an NBA team “the Browns” so basketball can return to Charm City.  Hey, it’s worked since 1953.)

Pray for a wardrobe malfunction.

Yes, I know it’s a Friday. Makes me hate Mondays all the more.

It snowed here.  Then we had an ice storm.  And it snowed again.  We have four inches of snow, two inches of ice, and another four inches of snow. Before you folks in Colorado, Utah, and Alaska say, “Wimps!”, remember 1.) we can handle tornadoes much better than you, 2.) this only happens once or twice a year in Southern Ohio, so shutting down the city is easier than prepping for a three-month Ice Age, and 3.) nobody goes anywhere on ice unless they’re Ice Road Truckers, so wipe that smug smile off your faces. I actually feel empty inside.  No, not because I’m not working today.  A day off is always a good thing.  See, winter weather events and severe thunderstorms induce a strong urge to make a run on Kroger for bread and milk, and I already have bread and milk in the fridge.  So I have this urge to run to the store with nothing to get while I’m there. And I don’t like milk. But while I’m enjoying the day off, the dog is enjoying the snow.  I snapped these pics Tuesday during the first half foot of snow, before the ice came.

Gurl frolicking in the snow. 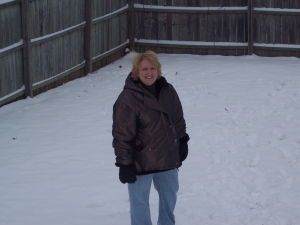 Nita hanging out in the backyard.  Most of what you see of her is coat.

Nita romping with the dog.

OK, first, check out this article in the Paper of Record.  It’s where the tagline for the blog this week came from.

Yes, Britain is chock full of names that bring out my inner 15-year-old.

Then I realized, “Hey!  So is America!”  And with a new administration in charge, it’s time I do my part to make America swell with pride.

So here, now, in the order I found them on Google this weekend, are the most offensive town names in America.  Feel free to add more in the comments.  Or, if you’re one of those foreigners from other countries**, share and enjoy with us.  After all, we can’t all be England and have a town called Penistone.

None of these, of course, tops Crapstone, UK.  Or as the residents call it, “Near Plymouth.”

[Thanks to John Scalzi for the original heads up.]

*I miss Beavis & Butthead
**I kid you not.  Someone actually said this, and I’m not talking about Jeff Foxworthy.

I’ve been accused of being a Mac Hater.  Usually, I just smile, pop on my earphones, and turn the volume waaaaay up on my iPod.  You know, the iPod some moron didn’t know enough not to play loud, then sued Apple over it?  (Some people deserve everything bad that happens to them.  I think Moses and Darwin both said that, and for the same reasons.)

It is not the Macintosh that I hate.  In fact, if I didn’t have so much money out right now, like the money I’m about to spend on an iPhone, I’d probably get a KVM switch and a Mini Mac.

“But Jim, why the loyalty to Windows?”

Since advent of Windows XP and Apple’s embrace of Intel, I’ve not been convinced the bump in price for switching to Mac would be worth it.  For starters, Mac, despite having a two-button option, still clings to the single-button mouse as it’s default.  I have always hated it, and hated it more when you had to hold your finger down on it to use the menu bar.  Sorry, but that’s not quirky and different; it’s antiquated and useless.  At least now they have “sticky” menus.

Yes, the interface is easier to use than Windows.  And a Sad Mac face is better than a Blue Screen o’ Death.  No argument there.  But are all those features worth the higher price?

And I say that in the waning days of the Vista era.  (Different rant.  Vista is a classic example of why Microsoft needs to stop being a slave to deadlines.)

Oh, given the money, I’d love a Mac.  In fact, I plan to buy a Mac book with my first sizable advance – a little present for me for making an editor see how awesome I am.

But when the Dell laptop dies and the Compaq tower is relegated to non-Internet facing word processor status, I’ll probably shell out $500 for a netbook and another $600 for a new Dell tower.  Less, since I get discounts from BigHugeCo.  The Mac is a someday piece of tech.  The Windows box is for now.

But what drives me up a tree is the Apple user’s smugness, an elitist attitude that says, “I can afford to do without the Start button and you can’t.”  They also own iPods (as do I) and iPhones (as will I) and have the earbuds to prove it.

Which always leaves me scratching my head.  Earbuds dig into your ears, so why are they popular?  Are they a fashion statement?  I prefer clip-on headphones.  “Ooooh, but that’s sooooo 1990’s, Jim.  Whenever are you going to come out of the Eisenhower Administration.”

My response, before kicking that person off my lawn, is usually, “Grow up.”

I suppose Steve Jobs is to blame for some of this, but who can fault him?  The man got screwed out of his own company in the mid-1980’s, went off to develop the framework for OS X, and came back to save it just before the Y2K.  And none too soon.  Apple’s previous CEO was Doctor Gil Amelio, who famously said anything Microsoft sells you will be obsolete.  You mean like System 7 and the Newton and the Apple IIe?  Hey, Gil, anything anyone sells you will eventually be obsolete.  Think about that while you’re driving your Packard around.

No, they’re not a license to be smug.  Unless you’re Steve Jobs.  Who has every reason to be smug.

You are not Steve Jobs.  Think different.  Don’t be smug.

My Town Mondays is a great project.  We get to visit different parts of the world, and those of us taking part get to learn more about our own cities and towns.  However, I should point out that I won’t do certain things for My Town Mondays.  Just not going to happen.

Check out more My Town Monday posts hosted by Sepiru Chris and Junosmom until Travis gets his house back.

Deadfolk by Charlie Williams
The Tourist by Olen Steinhauer
TKO by Tom Schreck
An 87th Precinct Trifecta: Killer’s Wedge, Lady Killer, and ‘Til Death by Ed McBain
Zoe’s Tale by John Scalzi
and finally, because I’ve been waiting to get my hands on this for months, Sins of the Assassin by Robert Ferrigno

Don’t forget, the Evil Yet Awesome Project is slated for April 1.  Prepare yourselves.

When they came out, I refused to get one despite having AT&T for my wireless.  It’s simple.  I’m allergic to fads.  I refused to watch Friends when it was on because everyone insisted I had to watch Friends (and every damned magazine in the country had a cover story about Jennifer Aniston’s hair, including The National Review and The Economist.)

And don’t get me started on hit songs.  Unless I catch a new hit before it’s a hit (Nelly’s “Hot in Here” for instance), it will forever be ruined in my mind.  Hence, you risk me going postal if you so much as mention “Achy Breaky Heart,” let alone sing it or play it.

Google teamed with T-Mobile for the Android, the world’s first Google phone.  Crackberry Blackberry offered the Storm through Verizon.  Palm is mounting an impressive comeback on the shoulders of Sprint.  Suddenly, the possibilities of what my least favorite device of the last twenty years – the accursed cell phone – could do seemed endless.  I did pricing.  I looked at plans.  And I realized it’d be no cheaper (and probably more expensive up front) to switch to Nita’s Verizon account just to get a Storm.

So, with the refund on my interest-free loan to the government, I am getting…

Yeah, I know you’re all shocked.  Mr. I-don’t-need-no-steenkeeng-smartphone-so-I-can-look-all-hip-and-stuff is getting an iPhone.

I’ll let you know.  Who knows?  I may even breakdown and start a Twitter account, though I still think Twitter’s about the most useless thing since Friendster.

Arrangements have been made.  Research is being conducted.  Guinea Pigs Testers are being drafted recruited.  Soon, I will be putting the nuts and bolts of the Evil Yet Awesome Project together.

And then…  And then you will see.

Or at least waste a little time on the Internet.  ‘Cuz that’s what it’s all about, isn’t it?