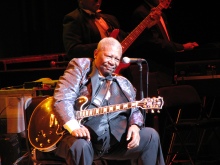 BB King died last week. It was the end of an era. There were other blues men who influenced the likes of Eric Clapton, Keith Richards, and Jimmy Page. Muddy Waters, Big Bill Broonzy, and Willie Dixon come to mind. But BB outlived them, and he was always the most gracious.

Someone said King brought a lot of joy to people by singing the blues. And BB brought it to himself. One thing I never realized while he was alive was that he never sang and played at the same time. I thought about that and realized that, yes, I’ve never heard a BB King solo and a BB King vocal at the same time. Both are distinctive. While people think of the guitar when they think of BB, listen to U2’s “When Love Comes to Town” off Rattle and Hum. That song is nothing without BB King’s back and forth with Bono.

I discovered BB in my early twenties when I went through a blue and jazz phase. I got a greatest hits album that included “How Blue Can You Get?” If you want to see how BB balanced the darkest blues with a sense of humor, check out these lyrics.

“I gave you a brand new Ford
But you said ‘I want a Cadillac.’
I bought you a ten-dollar dinner
And you said ‘Thanks for the snack.’
I let you live in my penthouse.
You said it was just a shack.
I gave you seven children,
And now you want to give them back.”

That’s the stereotypical blues summed up in one verse, and I roared with laughter when I heard it. You can imagine BB smiling when he delivered the last two lines.

He will be missed.