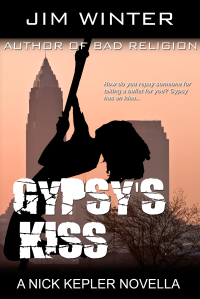 So Gypsy’s Kiss is the last Nick Kepler story ever. Right?

Well, a wise man once said, “Never say never.” (It was Sean Connery, but that was a really bad Bond movie.) Still, this almost was literally the end of Nick.

Right after I finished Bad Religion, when I thought Second Hand Goods might still be published, I sketched out an outline for a new Kepler novel called Suicide Solution, one that saw Nick investigating the wrong doings around an abandoned amusement park. It’s a premise I really want to revisit, but it may end up being something more along the lines of Road Rules if I do it. But the publisher folded. I went off to do other things, and the outline sat on the hard drive ignored and neglected.

Then all the Kepler novels and existing short stories came out via Kindle and CreateSpace. Boom. Done. Could we please get back to trad pubbing where a crime writer belongs? (Note: YMMV.) Well…

I had just redrafted Holland Bay and sent it off to a pal for editing. I finished Dick’s science fiction novel. I wanted to do something else long. So I pulled out the outline to Suicide Solution and…

Nick wasn’t talking to me. He barely talked to me in a short story entitled “Gypsy’s Kiss,” which I’d felt was a bit rushed. And I looked at the outline. It opened with a scene where Nick and his best friend from high school, a girl named Janine, had sneaked into the abandoned amusement park on their prom night. They had a “virgin suicide” pact in that, if neither of them had lost their virginity by the end of their last year at high school, they would do what sexually compatible friends could to solve that problem. These are teenagers. I did not say they were smart. In any event, they are about to do the deed when an arsonist sets the building on fire with them in the basement. They barely escape and avoid getting questioned by a deputy by faking the deed in the backseat of the car. “What? Us? No, officer. Please don’t tell our parents we were too busy deflowering each other to see anything.” Again, I did not say they were smart.

Well, this ended up being another story where Nick mopes about his life, ends up sleeping with his client, and Elaine has trouble deciding if she wants to stay married or be with Nick. I had no interest in writing that.

I liked the premise, but the execution made it come off as male wish fulfillment. Instead, I wanted it to be a struggle for Nick to actively avoid realizing that this call girl who’d saved his life might have genuine feelings for him. He’s in a weird place following Bad Religion. He’s lost his office. Elaine’s marriage is crumbling, but she seems to only want Nick to be available, not committed. And the business is dying. And here is Gypsy, who is escaping her life of being a plaything for hire. She is free of heroin and ready to start a new life with the money she’s invested. She is also very grateful to Nick.

Nick needs closure. He needs to do something about his agency. He needs to tell Elaine to make up her mind already. And he needs to get out of his rut. For all his problems, it seems like Nick doesn’t even care about his work anymore. He only gets worked up when Gypsy is attacked, and then he does the job for free. Less than free. He rents a friend’s summer cottage out in Lake Erie for a month, pays to go out to that island when access is difficult and expensive. He drives all over Northern Ohio without thinking about mileage or fuel or time. All he cares about is the woman who once took a bullet for him.

But this story defines Nick in a way the short stories and the novels do not. It happens in a scene recounting how he and Gypsy met. Nick was a suburban police officer and sees her come out of an apartment after he fails to find a suspect at home. They have a confrontation where she tries to stab him. Nick decides to try kindness instead of handcuffs after disarming her. He tells her if she wants to talk to him about the suspect, she can stroll over to his car where he’ll be doing paperwork. Dropping her weapon, he tells her, “You dropped your knife.” Gypsy still has that knife, though now it’s in a frame over her mantle.

I almost killed Nick off in this one. Then Jennette Marie Powell convinced me that would be telling the readers “Screw you.” Instead, I leave Nick’s future open-ended. One never knows when the muse – or a publisher – might whisper in my ear to write another one.