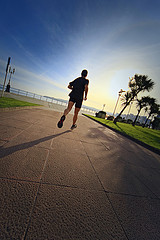 We’re down to crunch time for the Flying Pig. My goal is to run it in 2016. However, I’ve had to alter my plans somewhat. Part of the plan had been to run the Flying Pig Half Marathon this year. Only on my way to ramping up to a 90-day half-marathon training plan, the Winter household got hit with a wave of respiratory viruses. Get over one cold and another takes its place. This has killed running for both me and Nita in December.

In the past, winter has impacted our running efforts. It gets dark early. The cold temperatures are not so much a problem, but there is the danger of snow and ice. It’s not a matter of toughing it out. It’s a matter of staying upright and uninjured. Fortunately, this year, we have a treadmill. It’s enough to get back to the three miles a run I’d reached before Thanksgiving. One can do five miles on a treadmill easily enough. It has an aux jack like most modern car stereos, so I can listen to audio books while I run.

But I will not be ready for the half marathon this year. I have to get back to where I was before I got sick. Plus I have to finish my degree, which won’t happen until April. So instead, I’ve switched things up. I’ll be doing my annual weekend trek on various sections on the Little Miami Bike Trail starting this year in Springfield in March. Yeah, March. That’s going to be interesting if it snows a lot. Then the summer will be spent training for the half marathon. Which half marathon?

Well, I’ve decided to run the Loveland Half Marathon this coming October. That gives me an extra five and a half months (counting the full month of May as the Pig is run the very first Sunday of the month) to train. Also, I go into late fall with a head start on training for the full Pig in 2016.

Why am I doing this when my fellow cross-country runners from high school have stopped running due to knee and hip issues (and, let’s be honest, pressing golf games)? Simple. Training has the side-benefit of improving my health. I know I need to eat better. I already drink less. The exercise is the key to eliminating a lot of blood chemistry numbers that have resulted in lots of brown bottles in my medicine cabinet.

Plus it’s on my bucket list. I said when I graduated high school that I wanted to run a marathon. Should have done it years ago. I want to do it while I’m still relatively healthy enough for it.