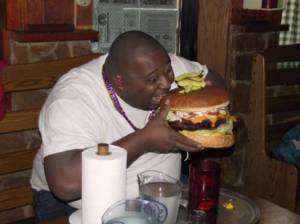 At the end of April, I had achieved a weight of 255 pounds, down from 274. My blood sugar was negligible. For the first time in years, my doctor did not scold me about angry liver. I felt I was on the verge of getting rid of the Darth Vader mask at night.

And then my birthday came. Hey, we have a new casino with a Jimmy Buffet’s inside. So I wasted away again at Margaritaville. (And they learned how to make Nita Ritas that day. They learned fast.) Then came Mother’s Day, and, well, AJ and I needed to spoil Nita. Then came AJ’s birthday.

And I had two full semester classes during the week.

And I finished the new version of Holland Bay.

Excuses, excuses. The result is that I lost most of the ground I covered by the end of July. My weight stays in the high 260’s (which kills some of the urgency to get it back off), but occasionally strays back into the 270’s, land of diabetes, angry liver, and high blood pressure.

This is my fault. Summer was when I was going to be able to run five miles easy. September was when I would find and run my first 5K race since 1983. Next spring meant 10K’s while 2015 was the Mini-Marathon. 2015 is still on, but I’m going to have to work a lot harder.

With class off, and no homework for a couple of weeks, I’m out of excuses. And next semester does not promise any new excuses. I have one weekday class and an accelerated weekend class that ends in October. Guess who has two thumbs and needs to start running again and needs to work back up to the Insanity workout he bought last spring.