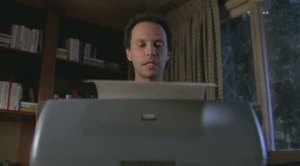 So, I dusted off the new first draft of Holland Bay. And guess what? I didn’t curl up into the fetal position and cry, “I can’t write! It’s complete crap! Oh, woe is me!”

By the way, not only is “Woe is me” a horrible cliche, it’s a grammatical atrocity that offends even me, the guy who promotes split infinitives and singular they as good grammar. Does anyone really say that?

All I did was read. I did tweak a couple of things, like switching “site/sight,” “your/you’re,” and so on. Occasionally, there was a word missing or I typed something in a hurry without really thinking about it. Other than that, I made no changes, no flagrant notes “Hey! Murdoch is 29 on page 42, and he’s 37 on page 254! WTF, man?” There were a few continuity problems, but this has been one of the cleanest drafts I’ve written in a long time.

Does this mean I’m done when I finish the revisions? Ready to pack off to an agent to earn me fame and fortune?

Oh, hell no! I’ve recruited a new first reader, having divorced the original one. I need someone who did not write this to tell me if this passes the smell test. And he’s edited before, so he’s exactly what I need to take the next step.

But it’s good to see first round of revisions won’t be as traumatic as they usually are. Some of this has to do with Holland Bay having an earlier incarnation. It kind of told the story, and the first few chapters resemble that earlier version. But then I took a different route to the ending and put a different bow on the package.

All I need now is to get this beaten into shape for the next step.

Then I gotta go write another one.