Back in 2004, I signed with a small publisher in the Baltimore area to publish Northcoast Shakedown, a detective novel set in Cleveland.  A week after I signed, I received a call from Steve Hamilton’s agent, who wanted to see the book.  I sent the manuscript.  A few months later, the agent wanted to sign me.  It’s great to be loved.

I called the publisher and said, “I’ve got an agent, but I don’t want to yank the novel.”  He said he’d let me out of the contract, no questions asked.  And here’s where the rookie mentality sank me.  I said, “How about I write a road trip novel for you?”  The publisher said, “Okay.”

I called my agent back and made the pitch.  Had I known the vagaries of the publishing industry, I would have told the publisher, “I’m talking to an agent.  Can we wait?” before signing.

Long story short, the agent didn’t take Northcoast, the publisher went out of business two years later, and I was pretty much orphaned.

And the road trip novel remained.

Fast forward a year later.  I had an outline.  And I received nudges to try my hand at National Novel Writing Month, the annual dare to write a 50,000 word book in 30 days.  But did I want to devote that much time and energy to an idea originally hatched to get out of a publishing contract?

I mentioned this to Charles Ardai, the mastermind behind Hard Case Crime.  He said, “Do it.  And I’ll look at it.  I don’t promise to buy it, but I’ll definitely read it.”

He’ll deny this, but he double-dog dared me, so there you go.

And here we are.  You can download the inglorious results for free at the Road Rules web site. 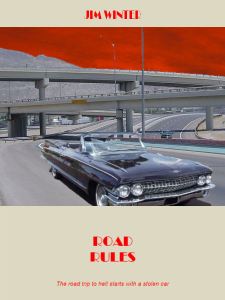