Chapter 6 is now live.  Check it out here.

The audio version, barring any major difficulties, should resume this weekend.  In the meantime, come check out the first installment.

If you look at the skyscrapers that have sprung up over the past decade in Northern Kentucky, they all look like… Well… Skyscrapers. Not that Cincinnati can brag. The PNC Tower and the Carew Tower are two classic icons of the Queen City skyline, but the rest are somewhat bland. The new Queen City Square tower will be a welcome addition to both sides of the river.

And then there’s The Ascent, anchoring one end of the Roebling Suspension Bridge. 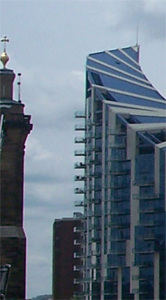 It’s the strangest looking building on the Ohio River in Greater Cincinnati, an example of building as scultpure.

END_OF_DOCUMENT_TOKEN_TO_BE_REPLACED

I’ve decided to resharpen my scifi chops after a loooooong absence.  There are two reasons for this.  First, there are more paying SF markets than there are crime markets.  So one is for credit, the other is to pay off the new heat pump I have to buy for the former Rancho Winter.  (I hate being a landlord.  Stupid housing market!)  Second, I’m sick of explaining to people I went to high school with that I’ve been doing crime fic for the better part of a decade.  (They also seem puzzled that I’m more into Garbage and The Foo Fighters now than The Beatles.  Hey, I kept all my Led Zep albums, too!  Doesn’t that count?)

However, let’s be honest here.  My science fiction chops came from Star Trek, Star Wars, 2001, and Terminator.  I could have probably spun some decent tie-ins for Babylon 5 or done one or two episodes of the reimagined Battlestar Galactica.

But aside from a couple of Robert Heinlein novels and John Scalzi’s output, I am utterly clueless as to written SF.  Here’s where you come in.

I need a list of 1.) classics every SF reader should know and 2.) which modern practitioners are must reads.  Some restrictions.

That’s it.  Have at in the comments section.

Chapter 5 of Road Rules is now live.  Check it out.

One of Cincinnati’s oldest landmarks was built between 1855 and 1865.  However, it was a banking scare, not the Civil War, that nearly scuttled the project.  In fact, fear of the war coming to Cincinnati and a need for solid transportation between Cincinnati and Kentucky after the war, which ever side Kentucky ended up on, forced its completion.

That would be the Roebling Suspension Bridge between downtown Cincinnati and Covington. 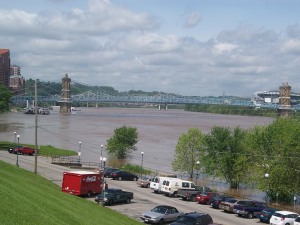 At 1057 feet long, it was the longest bridge in the world until another Roebling-designed bridge, the Brooklyn Bridge, was completed in the 1870’s.

END_OF_DOCUMENT_TOKEN_TO_BE_REPLACED

Chapter 1 of Road Rules is now online as a podcast!  ITunes download will be available by Monday.

And check out Axinite, the band behind the podcast’s theme music.  Music downloaded from the Podsafe Music Network.

Abrams calls this a prequel, the sneaky bastard.  And it most certainly is.

But it’s also a sequel.  Or rather, it picks right up where Nemesis left off, then promptly fraks with Trek continuity.

Yeah, don’t try to think about that too hard.  You’ll go cross-eyed like Austin Powers in the second movie.

Anyway, without getting into specifics, that effing rocked my nuts off!

Chris Pine and Zachary Quinto were pitch perfect as young Kirk and Spock.

Quinto manages to say “Live long and prosper” and make it sound like, “Eat shit and die.”  And yes, that’s exactly what Spock meant when he said that.

I was glad to see Uhura and Sulu get fleshed out a little more, including getting first names.  Uhura’s name is a running gag to torture Kirk for the first half of the movie.

Nero:  Khan amped up on meth with a kernel of sympathy.  The perfect villain.

There is a reference to every single Original Series movie, including the much-despised Star Trek V, and (Surprise!) Galaxy Quest.

Oh, and to anyone who mewls about a heretofore never-filmed romance between two major characters, I will require documented evidence that you and your mother do not live in the same house.  Failure to provide such evidence will permit me to tie you to a chair and force you to watch the Shatner “Get a life!” skit on a loop for 24 hours.

Today, JJ Abrams reboots Star Trek.  I hear some geek whining that Spock is not emotionless in this one.  (Um…  Have you ever watched the show?)  And complaints that some pet assumptions go out the window.  Wonder if Abrams will get the “as established in fanfiction” letter.  And will he laugh maniacally at the poor fool sending it?  Or sick a team of Paramount lawyers on him for writing such  a stupid letter.  I, for, one am pleased to see new lift breathed into the old story.

And this time, Starbuck is not a woman.

Yes, I’ve seen every Star Trek movie to date.  I’ve also seen almost every episode of The Next Generation and Deep Space Nine.  Voyager did not motivate me to ask people to tape it when it wasn’t on the air in Cincinnati.  And Enterprise?  I burned out fast.

But the movies I’ve seen each time in a darkened multiplex, except for Nemesis, which I watched on DVD.  So what was the best to the worst?  My answers may surprise you.

As you read this, I will be making my way across the Ohio River to the AMC theater in Newport, Kentucky, to see the new Star Trek. I’ll let you know what I think.